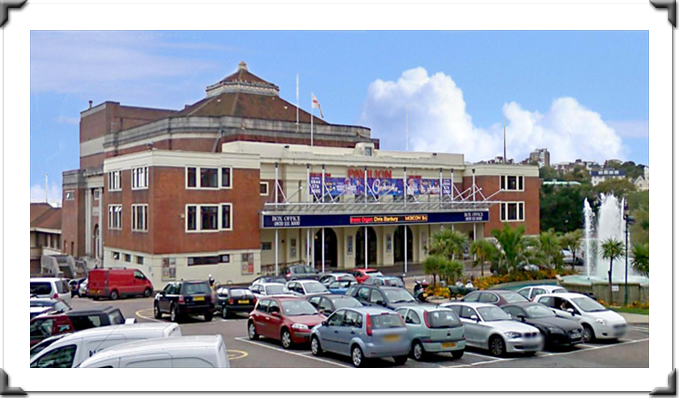 The Pavilion Theatre and Ballroom, located in Westover Road, Bournemouth, is a venue for year round entertainment. Built in the 1920s, it retains its splendour andelegant styling and is Bournemouth’s regular home for West End stage shows, Opera, Ballet, Pantomime and Comedy as well as for corporate presentations and dinner dances, product launches and small conferences.

Originally owned and managed by Bournemouth Borough Council, the Pavilion operates alongside its sister venue, the Bournemouth International Centre or BIC which can be identified in the background of this photograph, just behind the large cream-coloured building – the recently refurbished Hermitage Hotel.

Advocated as early as 1859, proposals for a Pavilion building incorporating a concert room, reading rooms and cafes were first authorised by the municipal authorities in 1892. The architectural competition was won by a young and unknown firm of architects called Home and Knight. On 19 March 1929, the building was opened by

Initially the Pavilion’s main auditorium was not called a theatre, but a Concert Hall, and within a few years it became apparent that it had shortcomings in presenting staged productions. As a result, in 1933 the stage was enlarged, both in depth and height, and it was reopened as a theatre in July 1934. Numerous further alterations have been undertaken since, including the addition of two storeys to either side of the main entrance in the early 1950s, and the replacement of the large fountain in the forecourt by a smaller one in 1968. In 1998 the building was listed Grade II and its future has therefore been protected.

BH Live was established in 2010 as a leisure and cultural trust and NPDO for public benefit. (NPDO:- profit is still sought and is reinvested in services or business growth rather than being distributed to shareholders). We promote participation in Leisure,

Arts, Culture and Heritage. BH Live is a company limited by guarantee and a registered charity. Our venues include Bournemouth International Centre (BIC) and Bournemouth Pavilion which offer a diverse range of entertainment and events.